1. The two tunes (not even tunes…phrases, lines)  that were stuck in my head for most of the time in New York…’Bad Sneakers’ by Steely Dan. ‘Bad sneakers and a piña colada my friend, stompin’ on the Avenue by Radio City, with a transistor and a large sum of money to spend….’ And The Real Roxanne’s ‘Bang Zoom Let’s Go Go’…’…sorry, wrong beat!’ And (via Looney Tunes) ‘I ain’t pushin’ no moon button…’ 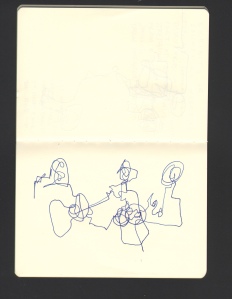 2. At The Stone – NoHo, Alphabet City, Lower East Side, Wherever. Ned Rothenberg’s trio, Sync, as part of his week-long residency. I admire The Stone’s austerity and the straightforwardness of their mission. The space is a former corner shop on 2nd Street and Avenue C with no hint of its function, the name stencilled discreetly on the door. Two sets a night with separate admission…a standard ticket price of 15 dollars. No pre-booking. No bar. No food. The ticket price goes straight to the artists. This last seemed particularly appropriate on the night I was there. Two sullen young folk on the door and then three of us in the audience…maybe we should have skipped the middle man and each given one of the performers their 15 dollars. The intimacy of this performance was strained by the inability of us 3 to fill the space with applause. Ned and his two accomplices played as if the room was full…although maybe I overheard something along the lines of ‘oh, lets just play…’ A possible hint of disappointment at the artist to audience ratio. Anyway, it was a beautiful, composed set with overtones of classical Indian music throughout…the tabla providing a swirling fluid centre around which saxophone and guitar danced delicate patterns. 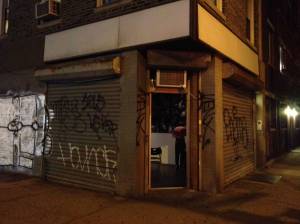 3. On a Friday afternoon, Astor Place closed to traffic to accommodate a continuous performance of Beck’s Song Reader by a variety of bands. (Song Reader is Beck’s un-recorded album issued only as a score). I chanced upon this event and stayed for a half hour as I was due elsewhere. I have noticed before the effect of the free concert in New York…namely that the social takes over from the musical. In effect the audience pretty much stops listening or, more accurately, allows its listening to become dissipated…is this just because the entertainment is free and therefore regarded as without value? This sometimes seems to be reflected in half-hearted performances too. This event was slightly different in that it was so low key…a Friday afternoon with the traffic rumbling down Broadway and up Lafayette, people strolling by and sometimes stopping, sometimes merely pausing. New York streets make a great backdrop to impromptu musical performances…contained, narrow, echoing canyons. Wisely the stage was set up facing the short end of the street with, in effect, a huge backstage area…this pushed the music into the active part of the adjacent streets. This was the flipside of a performance in The Stone…incidental, almost accidental, in its use of the city. As an audience we were drawn into this casual, quotidian encounter engaging in a network of relationships between music, sound, musician, street, audience, passer-by, architecture…