In the Mauritshuis in The Hague, there is one of those paintings of picture galleries. (‘Apelles Painting Campaspe’ c. 1630 by Willem van Hecht.) In the painting the works of art are stacked on shelves and hung one on top of the other on the walls. The ‘visitors’ mimic classical poses and inhabit the space as if they are models. On the left hand side there is an artist engaged in the process of painting a real model. (This is the Apelles painting Campaste of the title.) So academy and art gallery overlap. In the lower left hand corner van Hecht has shown a framed picture leaning up against a plinth. It shows a banker and his wife counting coins. The banker’s wife is leafing through a book but has been distracted by her husband. The book is open at an illustration which might be Adam and Eve. At the front of the banker’s table there is a small convex mirror – an unlikely artefact for the banker to have at his table, except that, reflected in the mirror is the head of a man in a red turban. Is this the artist of the portrait of the banker and his wife? Or is it a self-portrait of the artist of the picture gallery painting? I am reminded of Georges Perec’s story ‘Un cabinet d’un amateur’ (published in English as ‘A Gallery Portrait) with its dizzying receding perspectives in space and time. 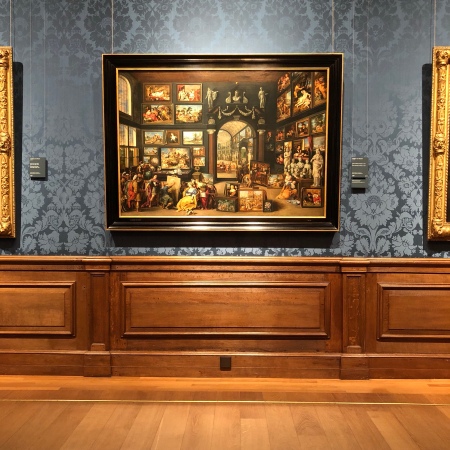 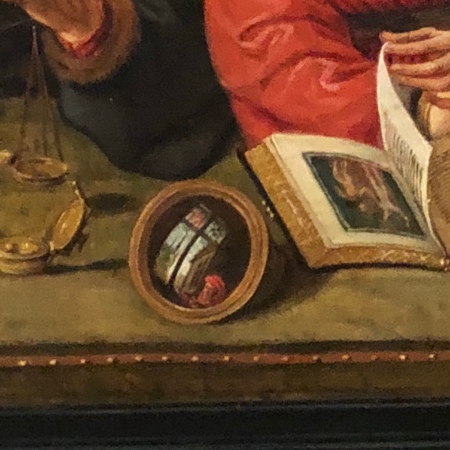 This is another Perec-ian exercise. It is not a description of what Café Oto is ‘like’. So no atmosphere or documentation of the music or performances. Just a bare description of the room at a particular moment in time. Maybe it is an exercise to be repeated at some point in the future.

Outside. Left to right: 2 big windows, a doorway, another big window. White awnings over the windows. The windows face south.

Inside. An L-shaped room with the bar in the short leg to the right of the door (east). In the main space, in front and to the left, there are 4 cast iron columns supporting beams running across the short dimension of the room. The floor to ceiling height is about 3 metres. The floor is grey concrete with lots of patches and stains. The walls are mostly white-painted brickwork with a small area where the bricks have been left unpainted.

The long wall to the west (running at right-angles to the windows) is where the ‘stage’ is located. This is more accurately a performance area as there is no step up to an actual stage. This area occupies the middle of the wall extending out from it by about 3 metres. The limit of the stage is notionally marked by two ceiling-mounted speakers and a fairly basic track of lights running parallel with the wall attached to the ceiling. A few years ago the floor-mounted speakers were replaced; this had the effect of marking the stage less precisely while improving sightlines in the space. A canvas cloth backdrop is hung on the wall behind the stage…this is changed when there are projections on the wall behind the performers. To the left of the stage there is sometimes a bench against the wall. This is moved when the piano occupies this space. On the right hand there is now a rack for cases and gear. Until recently this stuff used to be piled up on the floor as tidily as possible. The piano gets tucked into this space when it is not in use for any length of time. (The piano stored in there the last time I was there seemed to be the old one, the new piano was in the opposite corner.)

On the adjacent wall to the right is the door to the ‘gent’s’, a fire escape door, the jukebox (turned off in the evenings) and 2 small windows with retractable grills on the outside. Some time ago there was a record shop in the very narrow passage beyond the fire-door. There are also a number of Vent-Axia ventilation grills in this wall. The wall around the door to the gents is unpainted brickwork. On the wall opposite the stage is the door to the ‘ladies’’ and the mixing desk.

The furniture is a mixture of second-hand stuff. There are usually about 8-10 tables though when the place is at capacity these are stored. When Oto opened most of the furniture was from the Erco range (there are some photos of the space showing this furniture on the Architects site) but over the years most of these have disappeared to be replaced by a jumble of stacking and folding chairs plus a few benches that look like they might have come from a school. Each table has a night-light candle in a glass. The house lights are very dim consisting of 9 low wattage bare bulbs hanging from the ceiling. There is a single standard lamp with a bulbous wicker shade…this has been around for as long as I can remember though it seldom stays in the same place for long. The ticket desk is to the left of the entrance as visitors come in. There are usually two adjacent tables – one next to the wall for fliers and the other at right angles for CDs and LPs. Next to this there is a rack on which posters are displayed for sale. There are some posters on the wall next to the mixing desk and a few on the glass next to the door. There are plants on the window ledges. When the room is full the windows are covered in condensation.

The seating in front of the performance area covers about half of the floor with space for standing at the back.

In the bar area there is a blackboard for the drinks prices situated above a window into the kitchen. Behind the bar are the refrigerators for beers and wine with shelves above them. The shelves hold glasses and bottles and display the records put out by the OTORoku label. The bar counter is always littered with plates of snacks and there is usually another box of LPs and a display of the Wire magazine. There is a T-shirt with a picture of Lol Coxhill hanging up on the wall adjacent to the bar.

So Harry Matthews (b.1930) told Georges Perec (1936-1982) about Joe Brainard’s  (1941-1984) book I Remember (1970) in which he listed a series of memories of everyday occurrences distilled down to one or two sentences. Perec wrote his own version – Je me Souviens (published 1978) with 480 entries and an index. Gilbert Adair (1944-2011) in his book on British life Myths & Memories (1986) engineered a collision between Roland Barthes (1915-1980) and Perec referring to both Barthes’ Mythologies (1957) and Perec’s Je me Souviens. Adair thought it inappropriate to translate Perec’s memories immersed in French culture as they were and so he produced his own, peculiarly British, version of 400 entries. (‘270. I remember the bandleader Joe Loss and his vocalists Dennis Lotis and Lita Roza.’) Maybe there are thousands of other versions of this project (and maybe it is what the net is for) but I will refer to just one as it intersects slightly with my own history:   http://fifepsychogeography.wordpress.com/2012/02/12/i-remember-after-brainard-and-perec-nos-8-14-11th-february-2012-ce/

That one only goes up to 14 entries so far.

And here is the first half (1-29) of my I Remember edited down for this blog from an unknown number of entries to a total of 58. All these memories concern sound or music in one way or another.

The first manifestation of this ‘project’ (I thought it might have been a book but for now it is this blog) was a notebook begun on the 9th of December 2010. This was an attempt to record different kinds of encounters with music…though not the music I selected and listened to. So I listed all the albums I bought, the gigs I went to, the music I found (mostly discarded CD-Rs) and I recorded instances of sound ‘made visual’ in various walks around my neighborhood. Then I started to write down memories of particular places associated with music in my past. All of this had an echo of projects by Georges Perec – particularly An Attempt to Describe a Number of Places in Paris and Je Me Souviens.
I have a (clearly flawed) memory of reading a short essay by Perec documenting all his purchases over the course of a day. I can only remember two of the items…a can of petrol for his moped and a jazz record (maybe there was a pen too. Or some writing paper). I wanted to know which record it was that Perec bought…but now I can’t find the essay and doubt if it was by Perec at all. The fact that I remember two of the items suggests to me that the essay does exist and is not a figment of my imagination. I have wasted a great deal of time on the internet trying to find this piece and I have tracked back through the Perec books I own with no success. On one blog:

there is a clip of Howard McGhee playing Shades of Blue but there is no explanation of why it is there. I found other stuff though. In the biography, David Bellos documents youthful sessions where Perec and his best friend would listen to sought after ‘west-coast jazz’ albums. In Perec’s Je me Souviens (published by Hachette in 1978 and not, as yet, translated into English)) – a numbered list of apparently random memories – there are (according to Perec’s index) 20 references to jazz.

Here are some examples:

4. I remember Lester Young at the Club Saint-Germain; he wore a blue silk suit with a red silk lining.
6. I remember that Art Tatum called a piece Sweet Lorraine because he had been in Lorraine during the 1914-18 war.
41. I remember a piece by Earl Bostic called Flamingo.
87. I remember when Caravan by Duke Ellington was a rare record and that, in those days, I knew of its existence without ever having heard it.
223. I remember record sleeves, most often jazz ones, drawn by David Stone Martin.
301. I remember Sidney Bechet wrote an opera – or was it a ballet? – entitled The Night of the Sorceress.

But none of this gets me any closer to working out the question about the jazz record and the can of petrol. 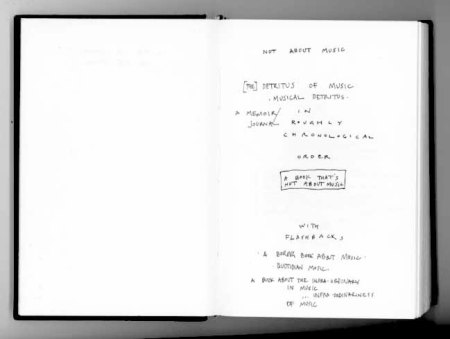 This is the second page of the notebook with various attempts to give the project a subtitle (it was already called ‘Like a Hammer in the Sink’ by then).