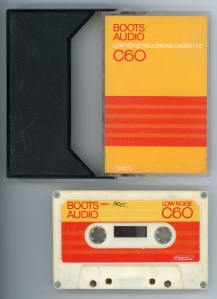 I was thinking about making a mix from the cassettes that I photographed in a previous post. The first box I lifted out was this one. According to the notes on the sleeve, one side has 5 tracks by Free (+ Layla) and the other is a selection of songs by Brian Ferry and Roxy Music. I wasn’t sure of my strategy for making a mix but thought I would just listen and work it out as I went along. The ‘Free’ side – Side 1 – has a couple of songs then the music cuts out to be replaced by what follows. This is an edited version. I have taken lots out (including a burst of the aforementioned Layla) but I have not put anything else in. I have not yet listened to all of Side 2 though it begins with ‘Where do you go to my lovely’… 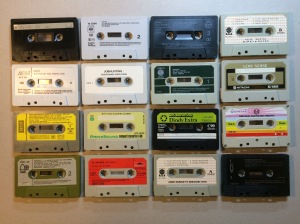 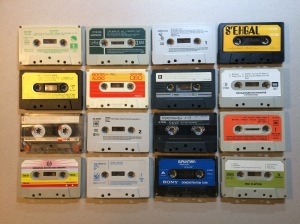 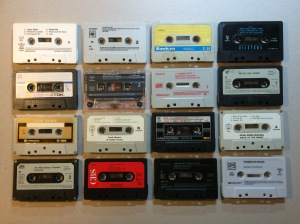 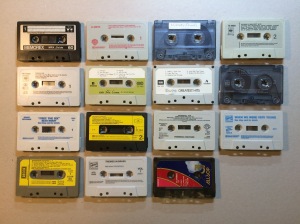 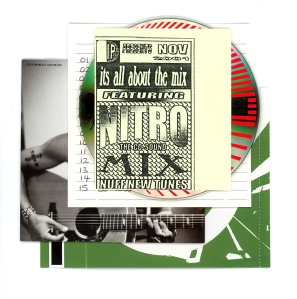 This is the 100th post on this blog…I had meant to do something clever like choose my favourite 3 LP box set (3 x 33 and one third…geddit?)..it was going to be either Yessongs or Escalator Over the Hill (no it wasn’t). But I was never going to get round to that and, in the meantime, I found a black bin bag containing around 130 CDs on Kingsland Road this week. Some were unplayable, there were a few free films from newspapers and some old software. There was one CD full of someone’s holiday pictures. The rest were mostly singles, either ‘Landfill Indie’ or the kind of R&B that does little for me. Still I retrieved 27 from the pile..the rest have already gone to Oxfam. Before I did this I recorded the shortest track from each CD for the purposes of experimentation…more of this at some future date maybe. Here is the first experiment/unholy racket…ten tracks that ended up at the beginning of the list played simultaneously and mixed down…it ends well I think. 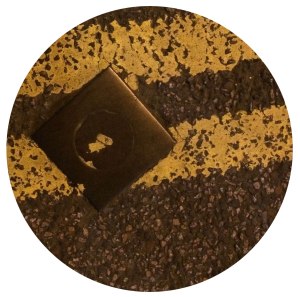 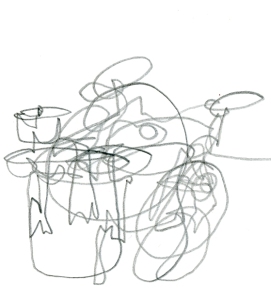 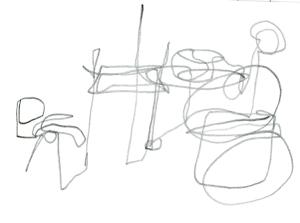 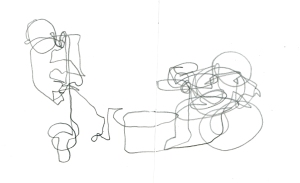 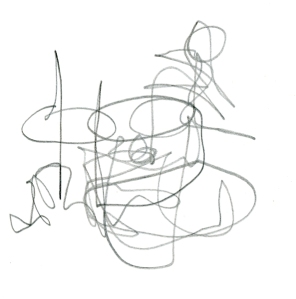 A rather wonderful sound installation called ‘Phantom Railings’ by an organization called Public Interventions on Malet Street on the wall of a small (private) park. The railings here (like many other sites) were removed during the Second World War to be melted down and re-used as guns or tanks…can anyone confirm that lots were dumped in the North Sea as they were the wrong sort of iron? Anyway, electronic eyes track passing pedestrians sounding out the absent railings as if they were being hit by a stick – so passers-by can make a mix by walking back and forth along the pavement. Seeing the Vimeo films on the website almost spoil the accident of finding this…but as Kurt Vonnegut used to say: ‘So it goes’.

Leafing through Wittgenstein’s Tractatus Logico-Philosophicus (as you do) my eye was caught by the word ‘gramophone’.

‘4.014                        A gramophone record, the musical idea, the written notes, and the soundwaves, all stand to one another in the same internal relation of depicting that holds between language and the world.

They are all constructed according to a common logical pattern.’

A complaint: at Cafe Oto this week for two nights to hear the Marc Ribot Trio (with Henry Grimes and Chad Taylor). These were fantastic gigs full of inventiveness, virtuosity, attack and a bunch of other superlatives. There was both wonderful ensemble playing and great solos from all the musicians. I am for enthusiasm and I believe it is important that audiences convey their enthusiasm to the performers when the music has finished. Oto till now has been (mostly?) free of that old convention of applause for solos but on Tuesday and Wednesday nights I was thrust back into jazz club days where the flow of musical invention and development was interrupted by a lot of clatter from the audience. Neither ‘so it goes’ nor ‘fair enough’ apply in this situation. 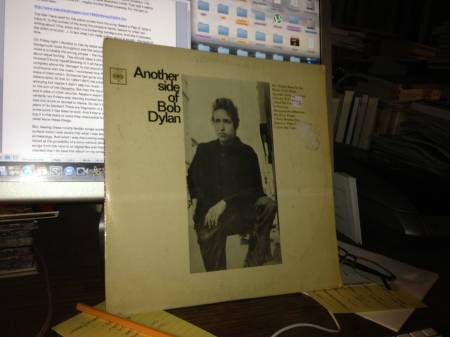 Just to get some practical things out of the way: I bought this copy of ‘Another Side of Bob Dylan’ in Oxfam on Friday. It cost 99p but is in awful condition. The kind of condition that would make it unsellable elsewhere I think. That said it seems to be an early issue of the LP…maybe the first British pressing. For the gen on this look here:

The title I have used for this piece comes from the song ‘Ballad in Plain D’ (side 2 track 4). In the context of the song the phrase is hardly relevant to my subject matter (‘Her sister and I in a screaming battleground, And she in between, the victim of sound…). In fact what I am really writing about is sound – the victim of time.

On Friday night I decided to risk my stylus and play the record. There is a lot of background noise throughout and the record skips and pops. In fact background noise is probably the wrong phrase – the music and the scratches are on just about equal footing.  This should class it not just as unsellable but unlistenable, however I found myself listening to it all the way through. There was something complete about the ‘damage’ to the record that made the extraneous noises continuous with the music. I wondered how the record had reached this thorough state of destruction. Someone had gone on playing this record for years as it deteriorated. At first (in 1964? 65?) the scratches were minimal and probably annoying but maybe it didn’t skip too much – especially if the listener taped a coin to the arm of the Dansette. But then the record was left lying around on the floor and in piles of other records. Maybe it wasn’t played too much at parties – certainly not if there was dancing involved but probably later on when everyone was too drunk or stoned to dance. So did it belong to one person through the years of its decline? There are fragments of a sticker that suggest to me that at some point it has been re-sold. And if that is what happened, did its second owner buy it in this state or were they responsible for the deterioration? Obviously I can never know these things.

But, hearing these mostly familiar songs working their way out from behind all that surface noise I was aware that what I was experiencing was a kind of listening archaeology. And what I was discovering was sound with patina…a patina that hinted at the possibility of a story without divulging that story. I can listen to the songs from this record as digital files and they come out clean and pristine. (I just checked that I do have this album on my computer…I do. but all the songs are labeled as ‘Black Crow Blues’…another kind of corruption/deterioration). But that sounds like a different album to me. Hearing the thoroughly messed-up vinyl was like really hearing something from the 1960s. ‘Another Side of Bob Dylan’ was released nearly 50 years ago. Harry Smith released his Anthology (archaeology?) of American Folk Music in 1952. The oldest selection on the Anthology (‘Sail Away Lady’ a fiddle tune by “Uncle Bunt” Stevens) was recorded in New York on March 29th, 1926. That’s only 26 years before the release of Smith’s compilation. When I listen to ‘Sail Away Lady’ it sounds to me like it is coming from a long way away…both spatially and temporally. (I’ve just listened to it on my computer with all its grain and digitized patina). Does ‘Another Side…’ now qualify as ‘Old Weird America’? After all, the recording pre-dates a huge number of Alan Lomax’s field and studio recordings that are now seen as an American national musical heritage. Does the fact that Dylan is still alive, that he has had chart hits, that he is commercial, that he plays huge venues, that he is, among other things, a rock star preclude his induction into the Old Weird Hall of Fame?

If I listen to ‘It Ain’t me Babe’ (Side 2, Track 5 of ‘Another Side…’) on my computer it sounds like it is existing in an eternal present. It probably does not sound like it did in 1964 after all its transformations and processing but who knows? Who can say what something sounded like 49 years ago? Our ears were different then. Now it is a file, a collection of zeros and ones – no longer the sound of a tiny sapphire point bouncing along a track between the ridges in vinyl. So my experience of listening to my fucked-up copy of ‘Another Side…’ is neither authentic nor definitive. Instead it is a slice of a past, freighted with the marks of too many moments to comprehend.

I guess I should do my own damage and put the thing back into circulation but I’m not sure I can trust the next person who picks it up and looks at those mangled grooves to put it aside. Sometimes what seems like a palimpsest is just a piece of junk. 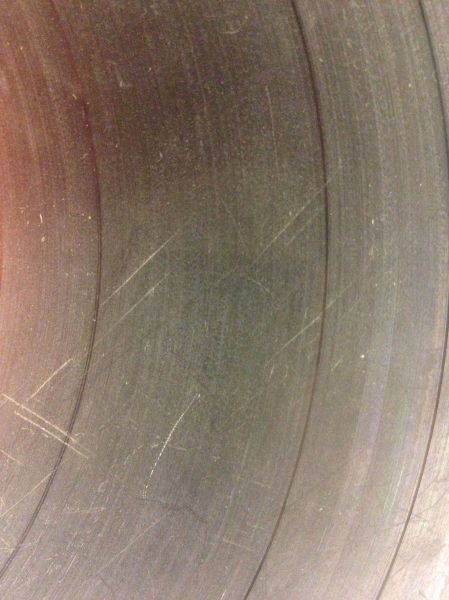 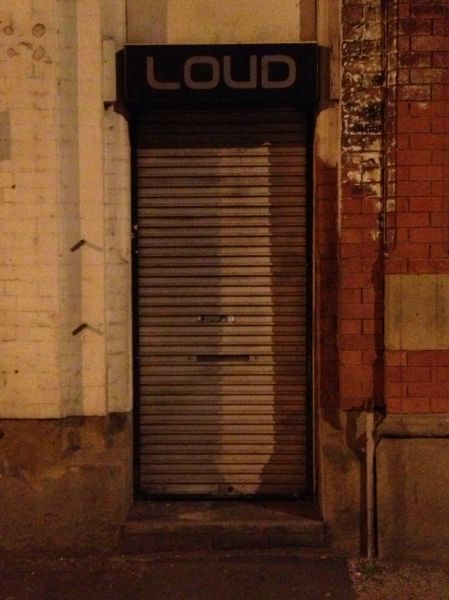