At Cafe Oto tonight…that’s HB playing the floor and AH on piano in the first drawing and HB solo on the drums in the second. 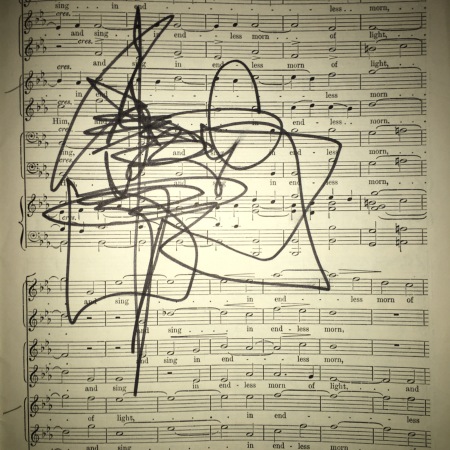 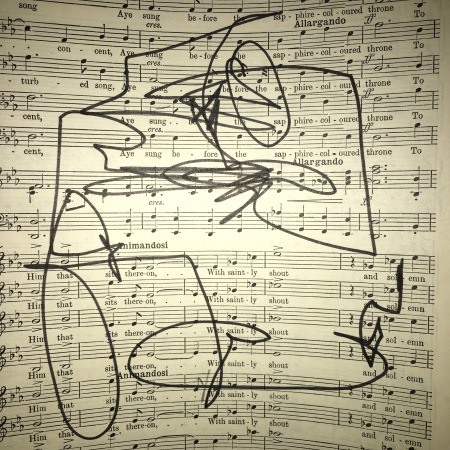 Accompanied by bird song, traffic, the conversation of roofers two doors away and a piece of heavy duty garden equipment from beyond the fence I sat in the shade at the end of our garden yesterday afternoon and finished reading ‘Into the Maelstrom; Music, Improvisation and the Dream of Freedom’, David Toop’s new book. The book sets out an incredible network of associations and connections and has alerted me to a good deal of music that I will explore in the weeks and months to come. This is the first volume of two and covers the evolution of a set of ideas ‘before 1970’. But it is not a linear history and the narrative swoops and dives in time (up to the present day) and genre. Amongst its many strands the one that preoccupies me on finishing is ‘listening’. The importance of listening and the balance between listening and playing to the improvising musician is central to Toop’s exploration.

As a determined audience member I have been trying to sort out the relationship and/or the differences between the way musicians listen and the way that an audience listens. In these (mostly) small spaces the symmetry of performers and audience can suggest a yin and yang of activity and passivity. But this is simplistic and I am always brought back to Duchamp’s statement: ‘The creative act is not performed by the artist alone; the spectator brings the work in contact with the external world by deciphering and interpreting its inner qualifications and thus adds his contribution to the creative act.’ In the case of the Large Glass this happened most obviously through reflection on the material of the work itself…with the viewer’s image literally transposed onto the surface of the glass. Something similar happens in that communal space of listening in relation to improvised music.

Then last night, five minutes walk away down that road that generates so much traffic noise, was the launch of ‘Into the Maelstrom’ at Cafe Oto. Some months ago David Toop asked if he could use one of my drawings next to a section he was writing about a performance by Angharad Davies and Lina Lapelyte. I realise that I have come to insert myself into the space of the performance (and the performance itself?) through making these quick, ‘blind’ drawings…last night Toop talked about my drawing (and those of the others in the book by Geoff Winston and Ross Lambert) as a parallel act of improvisation. The performances that formed the central part of the launch at Oto exemplified three distinct approaches to improvisation: long exploratory group work with five musicians, short concise duets with Toop reading and each musician playing in turn and then an unplanned hybrid of reading and four musicians playing. The juxtaposition of the structured (the text) and the wholly improvised (the music) highlighted the dichotomy that lies between control and freedom that is at the heart of ‘Into the Maelstrom’ and its rich netherworld.

And, to steal an idea from the Fife Psychogeographical Collective, I am now listening to David Toop, ‘Entities Inertias Faint Beings’.

Steve Beresford at the piano

The first a version of Cage’s ‘Indeterminacy’ with Stewart Lee, Tania Chen and Steve Beresford plus Chen and Jon Leidecker playing other Cage pieces and a piece by Chen herself. All performed with great panache and verve. I have seen the same trio ‘do’ ‘Indeterminacy’ before but this time I began to wonder if Lee’s comic persona and deadpan delivery was becoming, through no fault of his own, something floating free of the work. I know that many of Cage’s stories are intended to be funny and Lee resists the urge to ham up the comic effect, there are, after all, other constraints at work…but the audience will have their own way in these circumstances and in a piece like this the audience becomes part of the performance. Listeners can get it as wrong as musicians. If, as I suspect and as Duchamp kind of said, the viewer {listener} completes the work, then those listeners have a certain responsibility and can listen badly…I guess…

The link to the second night was in the aleatory nature of one of the three acts. (The other sets on the night were by Andrew Tuttle and Chris Rainier). Lisa Busby combines various electronic bits and pieces with cassette and vinyl playback and her own, often distorted, voice. (To make another, incidental link…there was quite a lot of voice distortion in Susanna’s performance at the same venue in the previous week). Busby’s pieces are composed – just as Cage’s are – and they walk a thin line over thin ice. The possibility of failure lurks just below the surface and hovers just to the side of that line. Purposeful chance operations like the deck’s stylus positioned half into the record groove or accidental ones, like a malfunctioning Walkman, make for a surprising and unpredictable sound environment. Add to this Busby’s recognition of the need for ‘perfomativity’ and the experience of witnessing this unfolding work becomes particularly interesting. This is hardly thought through but I am beginning to wonder if this visual and experiential element in aleatory and improvised music is something that (some) women are more comfortable with than (some) men. In very different ways I have seen Rie Nakajima and Angharad Davies use space and what might even be theatrical techniques in their work to similar dynamic effect.

And this is a link to her latest album, ‘Fingers in the Gloss’.

Elaine Mitchener improvising around a text from ‘Agua Viva’ by Clarice Lispector. ‘Am I haunted by ghosts? Am I myself?…’