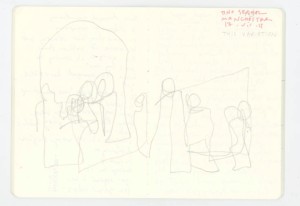 Double blind drawing of ‘This variation’. Chant: ‘How did we get to be so far apart? Something to share…’

I have experienced Tino Sehgal’s work only once before – in Tate Modern’s turbine hall.  I liked the semi-choreographed flow of the performers around the space and the way that fragments of the flow (the individual performers) broke onto the odd obstacle (members of the audience for want of a better word), engaging them verbally or physically. At one point in the London work, I was surrounded by a band of the performers and I was struck by the tension between the formal and the casual and between the group and the individual. Eye contact was made and smiles were registered but the experience was all held within a framework of well-mannered restraint.

I had already been to the Massive Attack v Adam Curtis performance in the vast disused Mayfield Depot behind Piccadilly Station and had been disappointed by the unimaginative use of the space. This week I wanted to see the Dan Graham piece ‘Past Future Split Attention’ in the same place. I was disappointed (again) as what was on show was a videoed version of a one-off performance that had taken place the previous Saturday showing in a dilapidated, yet domestic scaled room off one of the large halls. As a piece of video it was ok but I had been expecting something bigger and something live. So, after I had watched it through, I wandered off into the shed following some other foot traffic and I was directed into a dark doorway. I had a vague notion that there was some kind of Sehgal installation but was not immediately aware that it was this that I was entering. Beyond the doorway there was what seemed to be profound darkness – a faint, remote light shone onto the vaulted ceiling but at eye-level all was black and unboundaried. And before my sight began to adjust I became hyper-aware of a chorus of rhythmic vocal sounds. As in the Tate experience, I was instantly immersed in a kind of semi-organised, semi-improvised social experience. The performers, as far as I could see, were moving around alone or in small groups and the rhythms and melodies moved with them. The sounds were mostly abstract vocals but with occasional recognizable words (for some reason ‘electricity’ sticks in my mind) emerging from the layers. As I became more aware of the other bodies around me I found that it was not clear who was ‘performer and who ‘audience’. But then some people in the crowd began to shake and dance and after a few minutes the light source in the ceiling was turned up and a door was flung open letting in light from the outside. In the semi-darkness the singer-dancers had stopped where they were and now with the lights on we found ourselves surprisingly close and face-to-face. The light also signaled more frenetic dancing but, rather than this feeling awkward, the graduallly growing intensity of the situation seemed to make this controlled yet casual encounter both funny and touching (without touching). The room sank back once more into darkness but the sudden disorientating pitch dark of the initially walking into the space could not be repeated. I left exhilerated.

On my way out I stopped off in the Mayfield Depot entrance room some of the performers were taking a break and sitting adjacent to me. They were discussing strategies, moves, sounds, mouth music, working out how the next shift might develop. I saw that one of the people sitting near me had been the dancer shaking voodoo-like about a half metre away from me in the performance. But here, outside that space recognition had to stop at that.