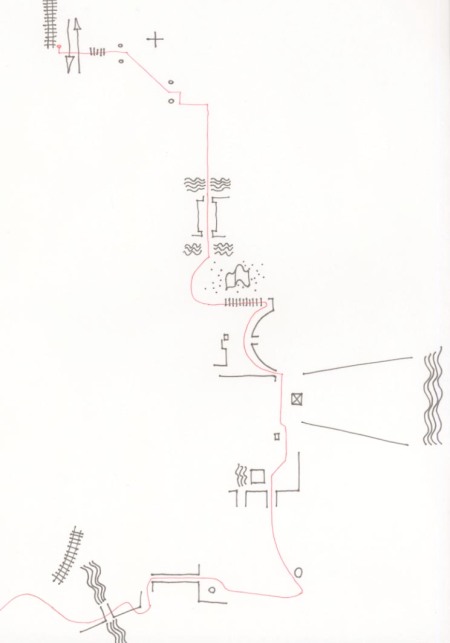 From Centralstation. This is one of my favourite urban walks….south from the station over Gamla Stan to Södermalm…it is a walk without the constant background sound of traffic and it encompasses a rich variety of architectural spaces. The over-riding sound is of footsteps and the low background babble of conversation. In fact, today, I start by leaving the station by the wrong exit so I need to cross Vasagatan, a dual carriageway, before walking up the steps into the St Clara churchyard. This connects via a back street to the pedestrian shopping street Drottninggatan which in turn leads to the bridge crossing onto the small island of Helgandsholmen where the parliament building is situated.

The passageway which bisects the parliament connects to another small bridge that crosses a dark, culverted waterway which always flows with an alarming rapidity. Today there is a demonstration in the open area on the other bank and I need to walk round this…there is a chant that sounds like ‘Shame Sweden, Shame Espresso’ – clearly this is only half right. I think later that I should have recorded this.

From here up the long, steep steps lead into the area behind the Royal Palace which is dotted with sentry boxes. The route follows the curved outer face of the barracks and then meets the end of a wide, sloping plaza with statuary and an obelisk looking out across near-distant water. A small street leads into a square (Stortorget) where the Nobel Museum is situated. Off to one side of this square is a beautiful well-head with water (movement and sound) frozen in stone on its four sides. This is a photo that I took on another trip.

The streets from the square slope down and eventually emerge onto the south side of Gamla Stan at Kornhamstorg where the containment of the narrow streets in the old quarter ceases. It is always a confusing negotiation across what seems to be a series of bridges, walkways and roads here and this is the first space since the road outside the station where there is any appreciable traffic noise. The sounds of buses, trains and cars intermingle here. Looking at this area on a map it is clear that it is actually a single, wide bridge with a narrow waterway running through it. Leading out of Södermalmstorg, Götgatan rises up the hill. Walkers only encounter the occasional car on the crossing streets. From the top of the hill there is a vista culminating in the dome of the Ericsson Globe . Over the top and down the hill Götgatan ends in Medmorgersplatan, the square in the centre of Södermalm, and here the traffic noise begins again in earnest as the square runs into a large wide street….