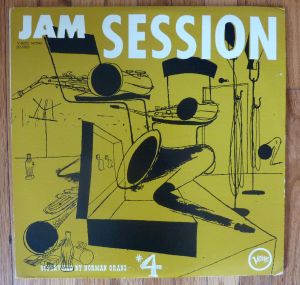 So a couple of days ago  I steeled myself and drove to Amoeba Records on Sunset and Cahuenga in Hollywood. I had been told that Amoeba would ‘blow my mind’ but I thought this was just a bit of Cailfornian hyperbole and I was sceptical. The underground car park below the store allowed for 1 hour free parking and I thought that would be plenty. In fact I have not seen so much vinyl in one place since the Oxford Street Virgin Megastore before the advent of the CD. There were two huge rooms on the ground floor full of new and second-hand CDs and records. Mostly pop and dance in the front with jazz and classical in the back. Faced with so much stuff I suffered the usual indecision and ended by buying what seems like a random selection of things:

‘Jazz Jam 4’ on vinyl for the beautiful cover by David Stone Martin. (With Count Basie, Benny Carter and many others)

‘The World of Harry Partch’ on vinyl to represent ‘weird’ America.

‘Heart Failed in the Back of a Taxi’ mixes CD single by Saint Etienne because I am a fan.

Three 7″ singles plus a CD as a package by the Nels Cline Trio called ‘Ground’ – for some local colour.

‘Imitation of Life/Double Indemnity’ on CD by Steve Beresford and Tristan Honsinger (with David Toop and Toshinori Kondo) because I thought it would be great.

Two Luciano Berio albums – ‘Epifanie/Folk Songs’ and ‘Laborintus 2’ because I love them both.

Then when I took everything to the counter I spotted a copy of Talikng Heads ‘Speaking in Tongues’ in the Robert Rauschenberg cover. On the plastic sleeve was written ‘Clean Sealed Orig! No yellowing!’ so I succumbed and bought that too.

My one hour time limit was probably useful as I might have just gone on and on juggling possibilities and ultimatley buying far too much. (There are still a couple of things that I wonder if I should have not put back.)

I thought that the perfect follow-up to this spree would be to go and look at the metaphorical stack of platters that is the Capitol Records Building on Vine. (‘Take me down to Vine Street. Stop when you hear that Bad Beat…’). Looks like just the number of records for a 12-stacker…this is Los Angeles after all. 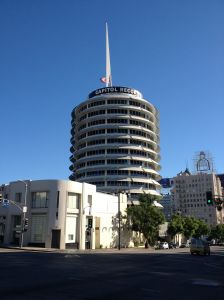 I have been having some difficulty finding things to listen to on the radio in the car in LA. Mexican and Korean pop (the seemingly ubiquitous ‘Gagnam Style’) are ok for a while. I’ve bumped into very sober and patchy classical stations too but none have seemed to fit my driving in LA mood. I thought that on the way back from the record store I would play some of the new CDs I had bought. First I played the Saint Etienne single and that was fine…mixes of a song that I already knew well with some added bad beats. The Nels Cline CD was sealed into a bag with the 7 inches so that left the Beresford or the Brotzmann. I thought the latter might be a little too ‘full-on’ for driving so I put on ‘Imitation of Life’. It begins in quite polite mode with something like a chamber ensemble then slowly begins to fall apart. At some point as I was driving I realised I was probably breaking the law in the US by driving without carrying my license with me. I am fairly new to the roads of LA so these factors added together made me feel a bit anxious. As the music developed so did my anxiety and when there was a sudden crash followed by whistles I was momentarily confused only to discover that these were on the CD and not on the street. Soon after there was a man shouting his innocence (‘I didn’t do it!’) followed by the sound of sirens and my paranoia returned in spades but I made it home safe just as the music ended.

Then yesterday at LACMA I saw this image in a small exhibition on Expressionist cinema: 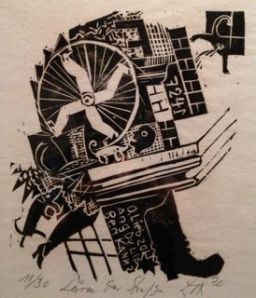 A perfect evocation of the urban sound field made in Berlin in the 1920s; just as relevant to the streets of Los Angeles in 2012.